This time, from NARAN-HO Design, specialist in web design in and from Marbella, we are going to talk about Rudolph de Harak, an American graphic designer, who covered a wide spectrum of applications with a clearly modernist aesthetic, full of geometric shapes.

Rudolph de Harak was born in California in 1924. In 1933, his family moved to New York. There he attended the School of Industrial Arts, where he learned some basics of more commercial design.

After World War II, de Harak returned to California, settling in Los Angeles. There he set up a small advertising agency and began working in graphic design. Along with other great designers such as Saul Bass or Alvin Lustig, De Harak created the Los Angeles Society for Contemporary Designers.

De Harak was not very successful in Los Angeles. For this reason, in 1950, he returned to New York, in search of work. In 1952 he opened his own design studio and this time he did find clients who appreciated his style.

De Harak produced illustrations for Esquire, generating collages with photographs, drawings and materials. He compared this work to jazz improvisations. It was this technique that he chose to design jazz album covers for Columbia, Oxford, Circle and Westminster. Also, he designed nearly 250 book covers at McGraw-Hill Publishing House, for books on psychology, philosophy, anthropology, or sociology.

Rudolph of Harak embraced a broad spectrum of work. In addition, he commissioned exhibitions, designed bags for the MET, and labels for The New York Times delivery trucks. His clients also include the Atomic Energy Commission, the National Park Service, and the United States Postal Service.

On the other hand, Rudolph de Harak was a professor of graphic design at Cooper Union for 25 years, also being a visiting professor at Yale, Alfred University, Parsons School of Design and the Pratt Institute.

Among his multiple awards are: member of the Art Directors Club Hall of Fame (1989), AIGA Medal (1992) and recognition of the trajectory of the American Institute of Graphic Artists (1993)

Shortly before his 70th birthday, Rudolph de Harak closed his design studio and left New York. He moved into a house that he had designed himself, in Maine. There he dedicated himself to playing jazz with his saxophone.

I tried to evolve forms that in feeling covered the entire emotional spectrum, and also were impeccable in their sense of order. This to me was modernism, and toward that end, I wanted to create constellations so rich that they in themselves would communicate content. 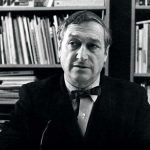 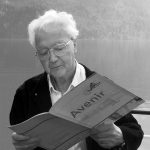