NARAN-HO Design, specialist in web design in and from Marbella, we are going to talk about Kazumasa Nagai, acclaimed Japanese graphic designer and poster artist.

Kazumasa Nagai began studying sculpture at Geidai, the Tokyo National University of the Arts, retiring in 1951. This same year he was hired as head of advertising by the Daiwabo Co., a textile manufacturing company.

In 1952, together with Ikko Tanaka, he founded the A-Club in Osaka, which supported local designers. In 1953 he joined the JAAC (Japan Advertising Artists Club). This organization was very important to highlight the social importance of graphic design in Japan.

In 1959, Kazumasa Nagai joined the 21 Association, in Tokyo. This was a meeting of designers who, on the 21st of each month, discussed graphic design, architecture, film, and typography. In 1960, he participated in the launch of the Nippon Design Center, an organization created to improve the quality of Japanese design, through collaboration with large companies.

During the 1960s, Kazumasa Nagai designed a series of posters for Nikkor, the Nikon Corporation brand of lenses, based on geometry and optics. He also highlights the logo he designed in 1965 for Asahi Breweries, Japan’s largest beer producer. In 1966 he won the design competition for the 1972 Sapporo Winter Olympics. He also designed the branding and posters for Expo’75 in Okinawa.

In 1987 he made a series of copper engravings, which he called “Life“. In 2014 he collaborated with Issey Miyake, with whom he developed a fashion collection.

Kazumasa Nagai has received multiple awards, including the Art Encouragement Prize from the Ministry of Education of Japan (1988), Mainichi Design Prize (1994), Tokyo ADC Grand Prize (1996), the Order of the Rising Sun (1999) and the JAGDA Award (2009)

Nagai’s work is part of the permanent collections of important museums, such as the MoMA in New York, Die Neue Sammlung in Munich and the National Museum of Contemporary Art in Tokyo.

Kazumasa Nagai continues to create until now. His style has evolved from a design of abstract forms close to Gestalt to the illustration of organic forms, such as animals. Nagai continues to use traditional graphic techniques. The animals that he presents on his posters have a symbolic meaning and refer to the tradition of Japanese art.

Nagai is considered one of the “12 Japanese Masters” (12 Japanese masters), which made Japan a world reference in design.

We have five senses and perceive things in nature. Now, design has functions. When we make the most of our five senses and design the most appropriate one to the function, I believe what we perceive from nature reflects on the design in a spontaneous way.

The design in the past was more unique because designers had their own styles. The design today has leveled up in terms of sense but designers are likely to follow similar patterns. It mostly works on peripheral nerves but should be more appealing to our souls, I suppose. 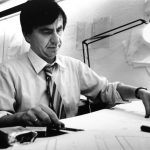 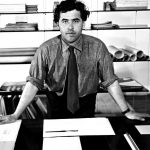