At NARAN-HO Design, specialists in web design in Marbella, we want to introduce you to Heinz Schulz-Neudamm, one of the exponents of German Poster Design.

Heinz Schulz-Neudamm was a graphic designer and painter identified with the Art Deco and German expressionism movements. His real name was Paul Heinz Otto Shulz.

Starting in the 1920s, Heinz began creating movie posters. Until the 1940s he worked in Berlin. He gained fame under the pseudonym Schulz-Neudamm, which was the result of adding his city’s name to his last name. He became known for his movie posters from Deutsche Universal Film AG and American studios 20th Century Fox and Metro-Goldwyn-Mayer.

The interwar period was characterized by the industrial technological development and social development of the bourgeoisie and upper class, which enjoyed luxury and travel. In this period, the Art Deco or Decoratif movement appears, which is an eclectic style, where elements such as the historical avant-gardes (synthetic cubism), the Bauhaus, Viennese Sezession (modernism), De Stijl (Suprematism), Egyptian art, Aztec art or Assyrian art.

He was also responsible for the design of Gestaltung der ParUfaMet-Pressehefte and Paramount-Journals, worked as an illustrator for Filmillustrierte magazine. From the early 1940s, Schulz-Neudamm moved to Wiesbaden, where he continued to work for the film industry, in particular for the famous company United Artists.

Some of Schulz-Neudamm‘s works are in museums in Germany and the United States, and have gained much value today. His best-known work is the 1926 poster for Fritz Lang’s film Metropolis. Currently, only four known copies are preserved: one is in the Museum of Modern Art in New York (MoMa), the second is in the Berlin Film Museum (Deutsche Kinemathek) the third belongs to a private collection, and the last is It sold at auction for $ 1.2 million (about 920,000 euros), making it the most expensive movie poster in history.

“This 1926 art-deco poster by German graphic artist and painter Heinz Schulz-Neudamm (1899–1969) was created for the premiere. Lang’s film, based on the novel of the same name by his wife, Thea von Harbou (1888–1954), depicts an urban dystopia, set in the year 2000, in which a class of managers living in luxurious skyscrapers suppress an underclass of workers who live and work underground. Schulz-Neumann’s poster features a female automaton that figures prominently in the film and plays a role in an elaborate plot to liberate the workers. In the background are seen the skyscrapers in the futuristic city of Metropolis. Only four copies of Schulz-Neudamm’s poster are known to exist.”

Austrian National Library
About the vintage print without the film’s credits of Metropolis poster that they keep.

Sean Linkenback
Lawyer and merchant of movie posters, referring to the poster of Metropolis, work of Heinz Schulz-Neudamm. 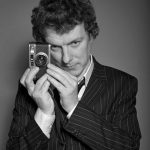