NARAN-HO Design, specialists in web design in and from Marbella, presents Beatriz Feitler, Brazilian designer and art director known for her innovative work in magazines and publications; Harper’s Bazaar, Ms. and Rolling Stone.

Feitler was born in Brazil, the country to which her parents emigrated during World War II. She studied at the Parsons School of Design in New York, where she graduated in 1959.

In 1961 she began working at Harper’s Bazaar magazine with Ruth Ansel as art assistants, two years later they both became co-art directors. During her years at Harper’s Bazaar, Bea Feitler put her innovative design into practice in the publication. Through her vision, the magazine reflected the excitement and turbulence of the 1960s, while remaining true to its traditions.

Feitler had a special relationship with photographers, through her photographers such as Bill King, Annie Leibovitz, Duane Michals, Bob Richardson and Bill Salano were introduced to the magazine.

In 1972 she joined Ms. magazine, where she created an experimental style using inks and blends of photography with illustrations and typefaces.

In 1974 she left Ms. and worked on various projects; ad campaigns for Christian Dior, Diane von Furstenberg, Calvin Klein, posters, costumes for the Alvin Ailey Dance Company, and album covers; including Black and Blue by the Rolling Stones.

In 1975 she began working for Rolling Stone magazine, significantly changing the look of the magazine, redesigning its format twice.

Her latest project was the premiere issue of the revived Vanity Fair magazine. She unfortunately she could not see the printed magazine. Bea Feitler died of cancer on April 8, 1982, depriving us of her extraordinary talent and visionary designs.

We are NARAN-HO Design, contact us to get to know us more and discover how we can help you.

A magazine should flow. It should have rhythm. You can’t look at one page alone, you have to visualize what comes before and after. Good editorial design is all about creating a harmonic flow. 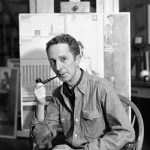